When things are at their very worst, Aaron Bye goes to work. As Crawford County Emergency Management Agency director, it’s all part of the job.

One month and 11 days later, the county experienced heavy rainfall resulting in isolated flooding and the collapse of a section of S.R. 64 near Eckerty. That, said Bye, taught him an important lesson: “Always be prepared. Even if it’s your first day, be ready to go and jump in as soon as you get there.”

Given his past experience, this baptism by fire didn’t phase him.

Bye has spent his entire adult life involved in emergency response in some form or other. He became a volunteer firefighter in 1998 and has been a member of every department in the county. He’s spent the most time on the Marengo-Liberty Township Volunteer Fire Department.

He’s worked 911 dispatch and as a jail corrections officer. Bye was an EMT for Crawford County EMS 10 years then spent nine years at Harrison County EMS. He retains his paramedic certification.

Bye first became involved in the county’s emergency management agency in the mid-2000s when Kent Barrow was director. When Barrow departed to become EMA director in Floyd County, Bye applied for the job, but Larry Allen was selected instead.

Bye continued working as a paramedic but nearly 20 years in that demanding field was taking its toll.

“I worked a lot of bad runs over the years,” he said. “I was looking for a change. It was time to leave.”

When the job came open again upon Allen’s departure a year ago, Bye applied and was hired.

“This ended up being the perfect opportunity,” Bye said.

His experience in the office in a volunteer capacity introduced him to the function of the agency. He had plenty of opportunity to have boots on the ground.

After a tornado hit Marengo in 2004, “I lived almost a week at the firehouse,” he said.

He’s also responded during an ice storm and the Hurricane Ike winds in 2008. The hurricane, he said, “was like a countywide tornado.”

Most of the county had no electricity for at least three days; some were out of power for 10 or more days.

He praised the way the community responded, saying the majority of people were able to cope on their own. There was a shelter set up, which a total of between 100 and 120 people utilized.

In addition to natural disasters, Crawford County has some unique characteristics from an emergency management standpoint. For one, the county has a small population spread over a relatively large area with some very remote areas. That can pose a challenge when trying to reach someone who might be trapped or in need of rescue.

The county has a major interstate running through it but has some very rudimentary gravel roads to navigate as well.

Crawford County is noted for its natural beauty, but that poses challenges from the perspective of an EMA director, too. “One of the bigger things is we have a lot of forestry, and that’s a whole other issue,” he said.

Also, the county had four or five rescues at Hemlock Falls this past year, including three other hikers who went over a cliff.

The county had three major barn fires and four major semi accidents in 2019. One of those involved a chemical spill that took three days to clean up.

“It’s been a busy year,” said Bye. Laughing, he said he was on a scene last year when “somebody patted me on the back and said, ‘Welcome to your job!’”

Bye takes it all in stride.

He’s enjoying being involved in emergencies as he’s been accustomed to, but having a different role.

“I still get to help … I like getting to step back and say, ‘What do you need?’ and helping where they need, getting that assistance.”

Bye is in the office daily but remains on call other times.

“I monitor the radios 24/7 for the most part,” he said. “If there’s an agency out on a structure fire or major accident, I do respond.”

His background also has resulted in his having a clearer understanding of where the county lacks in emergency-related resources and areas where growth and expansion would be beneficial.

Bye is currently in the process of getting the multi-hazard mitigation plan updated, which is required by FEMA every five years. The process takes about a year, and the county contracts with an agency to complete it. FEMA reimburses much of that cost (about $19,000) through a grant.

Bye says the county is not well-prepared to effectively and efficiently handle a large-scale disaster on its own.

“We’re looking at trying to change that,” he said. 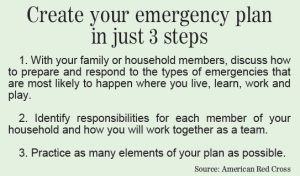 Should such an incident occur, a wide area could be involved, meaning outside help might not be available for several days.  Such a plan has several components; setting up a supply of drinking water and having adequate shelter areas designated are two key areas.

Bye also wants to establish a countywide Community Emergency Response Team. The sole one in the county, at Milltown, has dissolved with the approaching retirement of Marshal Ray Saylor.

Establishing a CERT involves recruiting citizen volunteers who complete a training course, enabling them to be able to assist in the event of a large-scale emergency.

The public, he said, plays a key role in ensuring an emergency event doesn’t become even more of a disaster. When disaster strikes, “the biggest thing is not to panic,” he said. “Take a moment to look around and see what you have to get by.” 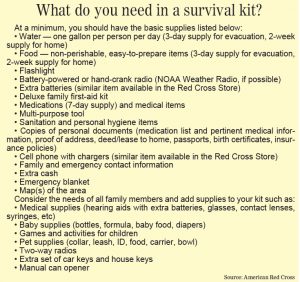 Bye recommends residents develop a disaster plan and have some basic supplies on hand. The American Red Cross, indiana.gov and homeland security all have information to use in planning for various emergency situations. Bye recommends liking the Facebook page Crawford County Indiana Emergency Management Agency for local information.

Bye’s role also includes chairing the Local Emergency Planning Committee, which is required to meet at least quarterly. The group typically does one haz-mat drill each year and maintains response plans for haz-mat emergencies. Bye said the LEPC maintains list of all haz-mat sites in the county. That extends beyond gas stations and factories to include the state highway garage and other sites that store large amounts of fuel. Each site is required to register with the state. That registration fee eventually goes back to the county.

“A lot of people have the misunderstanding that EMA is only for emergency response, that all I do is sit here and wait for big emergencies,” said Bye. “They have no idea what goes into the preparedness and having the county ready, responding to emergencies, then preparing for the next one.

“It’s not just responding to an incident and it being chaos. It’s the preparation before to help prevent it from being chaos.”

“I was born and raised here,” he said. “All my family’s from here …

“I love the area. It’s always been home  … It was time to start helping my own community.”

By Chris Adams, Contributing Writer Each winter when he was growing up in the southwestern Michiga...

Determination on the gridiron

By Kaitlyn Clay, The Corydon Democrat When most people think of the Super Bowl, their mind goes to...

Style
In honor of National Popcorn Day, which was Jan. 19, we turned to The Popcorn Board to learn about t...