Milltown sewer rates to increase for first time in 14 years

During a public hearing following its regular monthly meeting on July 13 at American Legion Post 332, the Milltown Town Council voted to increase sewer rates for the first time in 14 years. The hike is in part to help fund the town’s new wastewater treatment plant.

The connection charge remains at actual cost but not less than $500.

Most residences have a 5/8-inch water meter.

A first reading of the ordinance was approved 3-0 at a special meeting on June 22.

The town earlier this year received a grant up to $658,000 from the Indiana Office of Community and Rural Affairs to help fund the approximately $1.6 million project. What isn’t covered by the OCRA grant, including the required 20% local match, is to be paid for with a low-interest $940,000 State Revolving Fund loan.

“This, too, just brings us up to 14 years of not having a rate increase,” Jerry Mackey, the council’s president, said of the new rate schedule.

“There’s going to be some rate shock here because we’re jumping way up,” he said, referring to the gap in between rate increases.

“So, the way we need to go in thinking of it is, this just gets us to where we needed to have been a long time ago,” Councilwoman Jeanie Melton said. “I mean, this is not just a fix for the new sewer plant.”

Bob Woosley of project engineer Heritage Engineering said there is a chance rates may need to be increased even more to fund the project. He noted that all three construction bids opened earlier during the regular meeting exceeded the amount estimated in the project budget.

“We’ll have to follow up because we’re over budget on our low bid,” Woosley said. “So, we’ll have to see how that impacts a need for any future increases.”

“This does exceed the amount that was approved overall as the budget amount,” Woosley said after reading the bids during the regular meeting. “I think the construction budget was $1,330,000. So, we’ll have to meet back with OCRA on that to figure out what we do from there … and, at that time, you can make a decision on the award of the contract.”

Following a motion and second by members Melton and Justin Barnes, the council voted 3-0 to take the bids under advisement.

“We will look at the numbers to see why it exceeded our estimates, what elements exceeded the estimate,” Woosley said. “I mean, it could be one item that’s throwing it off.”

In other business, the council:

•Voted 3-0 to approve the purchase of a 300-gallon co-op fuel tank to provide the town, including the police department, with on-site access to fuel. The cost of the tank is $1,900, while that of a needed pump and meter is $650, bringing the total cost to $2,550. The project is to be paid for with the town’s casino miscellaneous funds.

•Approved, 3-0, the purchase of a Microsoft Surface Pro 4 to replace a Panasonic laptop used by the police department, along with a protection case, table and anchor case for in-vehicle use, wireless keyboard and connection cables. The estimated cost is $608.19. It will be paid from the police office supplies budget in the General Fund.

•Was told by Police Chief Jimmie Vincent that three reserve officers were to be sworn in the next day. Two of the officers are ready to patrol while the other needs to complete another class, he said.

“We were concerned about getting the property tax,” she said. “They had told us there could be a delay.”

•Was informed by Lutz that the town hall is open Mondays from 10 a.m. to 6 p.m. and Tuesdays and Thursdays from 10 a.m. to 4 p.m. She said the town is complying with Centers for Disease Control and Prevention guidelines, including requiring social distancing and providing masks and hand sanitizer at the entrance.

Many of us get cold chills at just the thought of things like having our fingernails pulled out by a...

‘Smoke on the Mountain — Homecoming’ now at Derby Dinner

‘Dark Knight’ lives up to hype

Derby Dinner’s Beauty is no beast

When Annie Myers, of Derby Dinner Playhouse, sent me information on “Beauty and the Beast,” the ...

Even if you’ve never been the father of a bride, you’ll be able to relate to Derby Dinner Playho...

Well, folks, Derby Dinner Playhouse has done it again. They have a show that no one should miss. “... 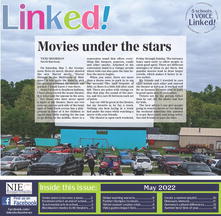