Floyd Central’s Jaydon Cirincione, below, and Will Conway dominate at the Hoosier Hills Conference cross-country meet winning for both the girls’ and boys’ races. The Highlanders and Superchicks also won the team titles for a clean sweep of the event, which was run at Crawford County’s Mike Esarey Cross Country Course. Photos by Wade Bell 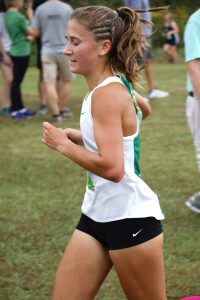 New Albany High School hosted this year’s Hoosier Hills Conference cross-country meet Saturday afternoon and did something different, choosing to run the meet on the Mike Esarey Cross Country Course at Crawford County High School, where sectional will be Saturday and regional will be the following week. When it was over, Floyd Central, which has won multiple sectional and regional championships on the course, had cleaned house again to sweep the meet both individually and in the team standings.

“For some people, it’s the first time they’ve seen the course, so it’s good to see the course, learn it, because we’ll be here for the next couple of weeks,” said Floyd Central boys’ coach Tim Korte. “We knew it was going to be a close race between us and Jennings County. As long as we came in and got in front of a couple of their guys, we had a good chance to win it.”

“We used to come down here and practice the Saturday before or a weekday so we could try to get to know it a little bit,” said Floyd Central girls’ coach Carl Hook. “It’s big. Courses like Brown County are wide open and you can see it easy, but here there’s a lot of little things to learn about this course, shifting gears and things like that.”

In the boys’ race, New Albany’s Aaron and Aidan Lord made a quick break to the front at the start with Floyd Central sophomore Will Conway third and Seymour’s Jude Bane fourth. At the halfway point, Conway was in front but only a step ahead of Aaron Lord with Aidan Lord just three steps behind them. Bane had lost some ground behind the three runners and was farther back.

“At the mile, I was right with the twins from New Albany,” said Conway, who was fifth in the spring state track finals in the 1,600-meter run. “I was right behind them. Then halfway I was able to shake Aiden off and then, by the two-mile, I put a few steps on Aaron. That’s what my plan was. I wanted to make it a one-man show by the two mile. I feel like I did that. … It was just fun that last K, not going too hard and making sure I kept moving.”

“He said he felt really good,” Korte said of Conway. “He looked like he raced a really good race strategically. He definitely had some stuff left. That will be fun later.”

“We had a good race,” said Korte. “We had a couple of guys run really well. Nate Wheatley ran well, and I think that Noah Nifong ran well. Next week at sectionals we probably won’t race everybody. If anybody needs a break or rest, then that’s the time to do it or, if we need to do a workout, then that’s the time to do it. That’s our last chance to have a rest before we get to the hard push.”

Runners at the start of the girls’ race were jammed together like sardines in a can through the first 200 meters. Floyd Central’s Jaydon Cirincione and Savanna Liddle took the point with Bedford North Lawrence’s Grace Tanksley a half step back on the outside. Floyd Central sophomore Kaitlyn Stewart was a step behind Liddle with Columbus East’s Chloe Krueger and New Albany’s Lauren Clark also in the mix.

At the halfway point, the Lady Highlanders had a four-runner pack with Floyd Central sophomore Emerson Elliott joining Cirincione, Liddle and Stewart. Seymour’s Vivenne Siefker also moved up to join the party with Tanksley a few steps behind. Jennings County’s Halle Franks moved up to sixth, and Krueger had slipped to seventh.

“Our plan for this race was to pack run with the first girl up until the second mile,” Cirincione said. “So right at the second mile, I took off and they came up after me and we just kind of pushed through the last mile to see what we could get out and see how fast we could go for the last mile, even with it just being tempo beforehand.”

The Lady Highlanders were just one position short of a perfect score, finishing with 18 points for the team championship. Hallie Mosier finished in the top 10 for the Lady Highlanders in the eighth slot and teammate Meredith Bielefeld was ninth in 20:38.23. Allie Main was 13th in 21:00.09.

“Today it was a bit of a pack run with the front runners,” Hook said of the Superchicks. “We knew we could get away with that a little bit. It’s nice for them to not go out and hammer it every single Saturday. If there’s any days you can kind of ease up a little bit for a mile or so or two, then it’s nice, and they have fun doing it. You kind of help drag the four and the five along a little bit with it so it worked out well for us.”

Cirincione said she is looking forward to the next two weeks.

“I won it here last year and have the course record, so it is kind of nice to be here three weeks,” said the Floyd Central senior. “I always enjoy doing the hills. I love it. I’m going to be excited to see if I can PR at regionals, to see if (Jasper’s) Andi (VanMeter) is going to help push me.”

The 2021 high school winter sports season is underway. Here are the events scheduled for the next we...

Lady Pack lose 3 after failing to close out contests

Battle at the First Capital tips off Friday

The Cluckers' Battle at the First Capital is slated to kick off Friday night and conclude the next e...

The 2021 high school winter sports season is beginning Here are the events scheduled for the next we...

The Rod Rippin’ Catfish Trail had a catfish tournament Saturday on the Ohio River at Leavenworth, ...