S. Central’s Baker, FC’s Liddle win
Floyd Central junior Savanna Liddle blitzes the field in the second half of the girls race in the Crawford County cross country sectional to win in a time of 20 minutes, 12.6 seconds. Photos by Wade Bell

When the Patoka Lake and Hoosier Hills athletic conferences ran their cross-country meets on the Crawford County High School course last week, the course was dry and fast for the teams. All of that changed, however, as at least two inches of rain fell on the area just before Saturday’s sectional run. The soggier conditions created slower times, but it wasn’t enough to stop the Floyd Central boys’ and girls’ teams from sweeping the event and taking home the sectional championship hardware.

“It was sloppy,” said Floyd Central boys’ coach Tim Korte. “The course was different today. We got a lot of rain this week, so they probably weren’t able to work on it. It doesn’t look like it was horribly slow. I already know that at least one person PRed. Nate (Wheatley) had a really, really good day. He was faster on this course today than when it was dry.”

South Central’s Maddox Baker had a plan going into the boys’ race, which was to stay just behind the leaders in the early going, which he expected to be the Floyd Central team. But, the Highlanders were running on a different plan, and Baker soon found himself running alone at the front of the field.

“Before the race, I wasn’t sure what everybody was going to do and I was going to just sit behind them,” Baker said. “Five or six of us were all within five or six seconds of each other, so I was, hopefully, going to sit behind them and then just see if I could make a move on the second mile on the hill and see if I could get around them and get away from them. All of that went out the door when I started.”

Korte said the Highlanders’ plan was to pack run to help pull the slower runners closer to the front.

“The top four guys were doing a workout and the last three were racing all out,” Korte said. “It was kind of like everybody was having a buddy with them to pull them along to get a good time. It looked really good out there.”

By the halfway point, Baker was well ahead of the rest of the field with Floyd Central’s Will Conway running in the second spot pulling teammate Noah Nifong along with twins Aidan and Aaron Lord, of New Albany, right behind them. At the finish, Baker was still by himself, winning in a time of 16 minutes, 36.1 seconds. The Lord brothers pushed by Conway and Nifong with Aidan second and Aaron third. Conway was fourth, and Providence’s Ben Kelly got by Nifong in the last few meters for fifth.

The Highlanders put all seven of their runners in the top 15 to finish with a total of 38 points to win the team title over runner-up New Albany. Borden finished third to advance, and South Central finished fourth as a team. Corydon Central also moved on finishing fifth.

“As a team, we did the job we were going to do and we looked good and we’ll move on to next week,” said Korte. “Will had Noah and he was trying to pull Noah to a good time. Effort is what we were going for. Weston (Naville) was pulling Nate Wheatley, so it was good.”

“The competition is better next week,” Korte said of the regional. “When we get those five best from that other sectional to come in here, we know the course and we know up front the individual race will be the big thing that changes next week. In the individual race, we’ll have to let some people loose. We’ll just see what happens. We’ll get to see Jasper, and we’ll see how good they are.” 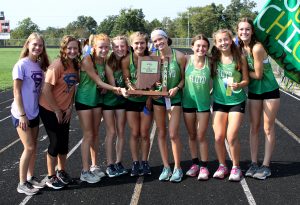 In the girls’ race the Lady Highlanders also had a pack-strategy planned for most of the race. Corydon Central’s Addison Applegate and Erika Valdivieso broke to the front at the gun with Floyd Central’s Savanna Liddle and Kaitlyn Stewart just a few steps behind followed closely by the rest of the field.

At the halfway point, the Lady Highlanders had six of their seven runners in the top eight, along with Applegate and Providence’s Maci Hoskins, all bunched together. Shortly afterward, the Floyd Central group broke up with Liddle blasting out to the front. At the finish, Liddle was by herself, winning in a time of 20 minutes, 12.6 seconds. Stewart was 20 seconds back in second with teammates Emerson Elliott third and Hallie Mosier fourth. Applegate was fifth.

“We decided to pack-run the first two miles and stay with the Corydon and Providence girls,” said Liddle. “Then, at the two-mile mark, we decided to race and take off. We had a good pack going and were all pushing each other. Me and Kaitlyn, we felt good but it got hotter, so the last mile we definitely felt the heat.”

“It was a little muddy and it wasn’t as shady as I thought it was, so the heat was definitely getting to me,” Stewart said. “(Liddle) pretty much broke away from me at the two-mile mark, which is where we decided we were going to race it. She had a strong kick. We have one of the best teams we’ve had in a long time, so we’re excited how we’ll do as we’re progressing through the tournament.”

One person missing from the Floyd Central pack was their No. 1 runner, Jaydon Cirincione, who suffered a hamstring injury during last week’s practice sessions.

“We’re hoping she will be back for regionals,” Liddle said. “We’re still going to stay with our hard workouts and still work the same. We’ll be keeping our mileage the same and working hard this week. We’re hoping to come back out next week and race the whole thing and hope for a good course and good times.”

Applegate, who finished fifth in 20:50.8, said breaking up the Floyd Central runners was her main objective. Floyd Central missed having a perfect score by one point, finishing with 16 points to win the team title. Corydon Central was second with 53 points with New Albany third, Borden fourth and North Harrison fifth to advance on to Saturday’s Crawford County regional.

“They ran good,” Floyd Central coach Carl Hook said of his Lady Highlanders team. “They stuck to the game plan this week the same as last week, basically pack it up for a couple of miles and take care of our legs a little bit and then get the last mile hard and then trying to be ready for semi-state and state.”

Hook said Cirincione’s status will be checked on a day-by-day basis.

“She has to be healthy for state for sure,” he said. “She’s an all-stater, so we can’t jeopardize that at all. She says she’s ready to run now, but we’ll see. … It’s a great team and a great group of girls who work hard every day, especially on Saturday. We took care of business like we usually do, so we’ll try to do the same.”

By Wade Bell, Sports Writer The Floyd Central Highlanders football team gave itself a chance of a ...

The Indiana High School Athletic Association released its sectional pairings as part of its 49th ann...

Brandon Miniard, Sports Writer, [email protected] While sports fans all over the natio...

The 2021 high school fall sports season is nearly complete. Here are the events scheduled for the ne...

The Georgetown Optimist Club sponsored a team in the Floyd Central Jaguar Mini League for 2021 with ...

NRA Hunters for the Hungry donates $1,500

Hoosiers Feeding the Hungry recently received a $1,500 grant from NRA Hunters for the Hungry to supp...