The Rod Rippin’ Catfish Trail had a catfish tournament Saturday on the Ohio River at Leavenworth, and there were some real river monsters brought in for the weigh-in. Above, Gilbert Whittaker, right, and Brandon Saltzman, of Owensboro, Ky., hauled in this 79.5-pound blue catfish that won the Big Fish title for the day. Their total weight of 97.3 pounds, however, was not enough as Louisville’s Ricky Eiselt, below left, and Virgil Hardin totaled in 118.5 pounds that included this 76.5-pound behemoth. Several other monster catfish were weighed in, ranging from 30 to 60-plus pounds. All of the fish were safely released back into the river. Photos by Wade Bell 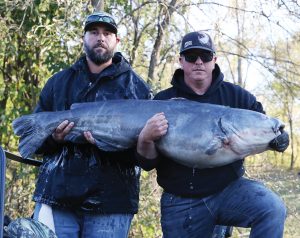 The 2021 high school winter sports season is underway. Here are the events scheduled for the next we...

Lady Pack lose 3 after failing to close out contests

Battle at the First Capital tips off Friday

The Cluckers' Battle at the First Capital is slated to kick off Friday night and conclude the next e...

The 2021 high school winter sports season is beginning Here are the events scheduled for the next we...